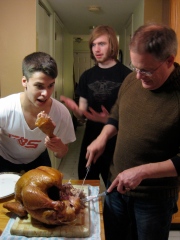 When a former colleague learned I’d started Crazy Good Parent, he congratulated me but also said “crazy parent” and “good parent” were pretty much mutually exclusive to him.

That’s the fallacy we’re trying to counter here. Dealing with a disordered mind certainly makes parenting more challenging. But, because I’m bipolar, there are experiences I’ve had and things I’ve learned that have helped me parent my children. Here are a few:

There’s not much my kids can do that shocks me. My son thinks he wouldn’t be able to do drugs or get drunk without my having some sixth sense about it; I’m not telling him otherwise. He also knows that he can talk to me about things his friends’ parents just don’t want to hear.
I’m not afraid of much. Going to China to bring a daughter home was a piece of cake for someone who’s trusted—again and again—that the swallowing darkness will eventually recede.
Years and years of therapy have taught me the rules of engagement. I know how to talk the no-blaming, no-shaming talk. Though I don’t always remember, I’ve learned that my children’s own punishment of themselves when they’ve stumbled is far more powerful than my screaming. And when I stumble, I’ve got a professional support team at my back.

Yes, parenting is harder when your brain doesn’t always cooperate. But that doesn’t make “crazy” and “good” mutually exclusive. It’s not just holiday schmaltz that makes me believe my disorder has, in some ways, made me a better parent.

What about you? How has being a crazy parent also made you a good one?