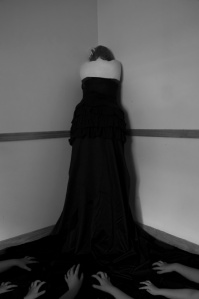 A writer at heart, Kelly Suellentrop blogs at AreYouFinishedYet.com. Once a high school English teacher, she is now a married mom to two, amateur cake decorater and self-professed worst gardener on the planet. What she lacks in horticultural skills, she makes up in video production. You must check out her ode to the minivian, This Van Is Stacked.

This year at the Thanksgiving table, I ate just as much food as I always do. But I felt lighter. Maybe it was because this was the one year anniversary. The anniversary of the anxiety attack for which I am extremely grateful.

I can’t say for sure how long I have struggled with anxiety, because for most of that time, I didn’t know what it was. All I knew was something was wrong with me, something that seemed undiagnosable and invisible, yet felt as real and threatening as any known ailment I had ever had. It was hard to pin down because the symptoms weren’t constant or consistent. It was almost as if each part of my body took its turn going haywire, only to remedy itself just before I felt it was time to call the doctor. And then even when I did find myself in the doctor’s office, I was at a loss for words in describing what was wrong. Because EVERYTHING felt wrong, but not all at the same time. I felt embarrassed, especially at my young age, to rattle off my laundry list. Pick a problem, lady. Either that, or stop watching Dr. Oz. You’re not sick. You’re a hypochondriac.

Anxiety is a funny thing. You can’t see it on an X-ray or an MRI. There is no test for it. But when it gains enough power, it can make real, physical revolts happen in your body. It’s like this stealthy, silent, invisible coup. Every part of you is fighting with each other, but the guy that caused it all is nowhere to be found. So the more I was told nothing was wrong with me, the more I felt unjustified in my complaints or my pain or my exhaustion when they continued to persist.

My internist was the first one to finally suggest I was having anxiety or panic attacks. She felt there was no other explanation and quickly wrote me a prescription for Zoloft. I took it, though I was timid in doing so. I am not one to simply pop pills, and I don’t like taking medication unless I absolutely have to. But I was desperate to stop the panic attacks, so I tried it. Except that it made me feel even worse, to the point where I didn’t feel safe being alone with my children. So I called my doctor and told her I wanted to stop the meds. I felt sure that now that I knew my problem was anxiety, I could put mind over matter. I could talk myself out if it. I mean, all of this was literally in my head, right?

The problem with anxiety is that all it needs is that tiny bit of stress you are holding onto, or any miniscule fear you harbor, and it uses that to manifest itself and rage inside of you. So the fact that I was trying to get the attacks under control but they weren’t getting better just ended up feeding more stress and fear into the equation. Do you see where I’m going with this? I was not in control of my body anymore.

The only person who ever knew I was having these attacks was my husband, who would wake up in the middle of the night when one would rouse me from a deep sleep, get me glasses of water, and help me slow my breathing. If I had one out in public or with friends or family, I was too embarrassed to tell anyone what was going on. I felt ashamed to bring attention to it. I remember being in a movie with my daughter and making her come to the bathroom with me because I thought I was going to die right there during “Tangled,” and I didn’t want to leave her alone in the theater while I went to get some air. For the most part, I think I played it off around others brilliantly. But by hiding it, I wasn’t helping myself. I was just feeding the monster.

I finally broached the subject with my OB-GYN during my yearly visit because the attacks were becoming a weekly occurrence. He is the one doctor I trust more than anyone, and somehow I was hoping he had a way to fix everything. Or that somehow he would find something wrong inside my body that was really causing all of this, something that had been lurking so deep that no one else had been able to find it. It sounds weird to wish for something to be wrong with you, but at least it would be tangible. At least it might be something where he could open me up, take it out, and all of this would be over. But he had the same answers for me. However, he understood my wariness to medicate, so he encouraged me to watch my diet and get a lot of exercise. And he told me to call him if that didn’t work, if I wanted to try another course of action.

I tried. Maybe not as hard as I could have, but I tried to do it on my own. I think by that point, I was too far gone. I didn’t really BELIEVE I could get better, and the constant fear and worry over when the next panic attack would occur became the norm. I wasn’t sure I could live with that.

My body wasn’t sure of it either.

So on Thanksgiving of 2012, my body sent me a message, loud and clear. I was getting ready for bed after a long day of good food and good family. As I drifted off to sleep, something triggered it. I don’t know what; usually I never did. It was one of the worst anxiety attacks I had ever had. It was so bad that I continued to have little “aftershocks” the next day, during Black Friday shopping. I had enough. I called my OB-GYN that following Monday and left a message. He returned my call as I sat in the elementary school parking lot, waiting to pick up my daughter.

There I was, in the middle of my daily, average life. A life that had somehow become too much for me to handle, despite all the blessings and ordinary comforts I enjoyed. A life that shouldn’t make anyone feel anxious or panicked. But it did.

That’s all I had to say. I felt the tears coming hard and hot, as other mothers sat in their minivans and Suburbans around me, oblivious to this woman who was usually the go-with-the-flow type, the one who answered requests or apologies for mishaps with a quick “no worries.”

I remember the words that came through from the other end of the phone. “We need to get you feeling right, Kel. Because you don’t deserve to feel like this.”

He asked if I would let him prescribe me some medication, and he promised he would try something different from Zoloft…and that he would ease me into it slowly. All I could do was trust him.

And I’m glad I did. I started on Viibryd that very week. I had a few side effects at the beginning, but nothing worse than the anxiety attacks I was already having…and definitely not like the side effects I had with Zoloft. After a couple of weeks, things evened out. And slowly, I began to feel…centered. The attacks became fewer until they stopped altogether. After just over seven months on the medication, I felt like I could go it on my own again.

Obviously, everyone is different. For me, it seems like I needed that extra help from the medication just long enough to convince myself it really was the anxiety causing all those varied problems and symptoms. The irony is that my anxiety was making me doubt my anxiety was the actual culprit. I was able to see that once the medication got it under control, the attacks, the random ailments, the feeling that something was wrong inside my body, all went away. Now that I have been off of Viibryd for around 4 months, I still feel good. I have had a few anxiety attacks here and there when things get more stressful than usual, but somehow my body knows how to shut them down pretty quickly, because I’m confident in what they are now. And I know they can’t really hurt me unless I let them. Still, I have also come to terms with the fact that I will likely always be prone to anxiety, and the moment I underestimate its presence will be the moment it will overrun me once again.

Had that anxiety attack not happened last Thanksgiving, who knows how this past year would have gone. I probably would have eventually gotten help, but how much longer would I have waited? How many more moments in my life would have been overshadowed by the fear of a surprise attack? How many more times would my husband have to drag himself into work after sitting up with me during a non-life-threatening situation that felt life-threatening? How many more days would I have to live not feeling like I do today? Because today, I feel pretty good…maybe even really good.

Now, when I tell someone “no worries,” I almost always mean it.

Editor’s note: Thank you to Samantha Pugsley for allowing us to use her work, Trapped. Samantha is a fine art photographer based in Charlotte, NC. She uses photography to explore her own issues with Generalized Anxiety Disorder. “Since I started photography, mental health has been a huge inspiration for me. I have touched on issues such as anxiety, depression, and body dysmorphic disorder. My main goal in sharing my work is to inspire, encourage, and impart hope to others.” You can see more of Samantha’s work at https://www.flickr.com/photos/slpugsley/ and at Broken Light Collective, a collection of works by artists with mental illnesses, disorders and other issues.

24 responses to “I’ll Pass On The Leftovers Of Anxiety”